Building Your Own Drum, Cocktail Kit (how I did it)

Building a cocktail drum set (aka: knock-down kit) is fairly easy by using your existing drum set while achieving such a very small investment.

In this example, I wanted to keep my existing drums yet eliminating the need to bring my kick drum and two upper tom drums to a smaller gig… Taking only my; snare, high-hat, crash and ride cymbals, and the floor tom… eg., a ‘cocktail’ sized gig drum set.

Oh, I also didn’t want a ‘stand up’ kit. I prefer to take the drum throne and sit during gigs. Standing up while managing the kick and the high hat may look interesting but it’s a chore. Realizing many cocktail kits use only a kick, making standing up an option.

Oh, I’m further keeping my YouTube Channel (somewhat) updated… It has numerous other music (and other) references,
here:
https://www.youtube.com/user/IamMichaelLofton

A list of my [Michael Lofton’s] previous bands includes… 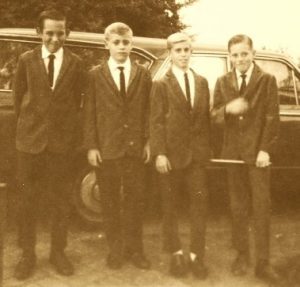 Currently a hired-gun drummer for many bands and host drummer for jams, inclusive of jams I’ve hosted myself for many years.

Other artistic ventures, include…