After popping through the other side of a severe squall line of thunderstorms, heading the opposite direction of our route just west of Chicago, the Boeing 727 United Airlines captain came on the horn and asked, “What kind of aircraft are you?” I responded as the co-pilot in the right seat of our ship, “We’re a Vickers Viscount.” With a slight chuckle in his deep voice the United captain responded, “If I were you I’d turn around right now and find a suitable airport to wait this weather system out.”

Damn, not what we wanted to hear!

This Nazareth flight started with a pickup in Phoenix, Az. (PHX) on July 1, 1979. July… Meaning it was hot as hell even if our departure time was close to midnight. About 97 degrees that evening.

Along with my hired Captain (I flew first officer on this trip) we stood ready on the ramp of Phoenix International airport for the ground arrival of Nazareth’s crew.

The interior of this aircraft had all but ‘8’ seats forward removed, whereby aft of an appropriate bulkhead (wall), we carried their complete stage (inclusive of all; instruments, monitor equipment, back-line, and some forward throws, etc.).

The first thing the road manager did was open his road Anvil case and handed me $28K. [No worries, after all the airplane flight expenses anything left over was claimed on my taxes (damn it!)].

Next thing we were flying toward a Squall-line (a massive line of thunderstorms that doesn’t allow for passage in any aircraft that can’t get above 28K feet!) just past Chicago… our intended boarder crossing entry point was Des Moines, IA. – Shit, scratch that… time to turn around and head for Midway, Chicago. Problem was… we alerted the gov border folks of such change in plans and they weren’t all to happy about it.

Anyway…
Upon landing @ Midway (back when there was only one terminal open for the occasional airline flight in 1979) we were greeted with a couple of, not so friendly airport gov’t entities. They took one look at the 7 (very tired) stage crew dudes [hippies!] and a couple of long-haired (albeit we had nice atire) pilots, and a shit-pile worth of containers (a bunch of black box stage gear stuff) on board and said… “You know, we could have you unload all of this shit right now, just to prove to us that it’s really sound gear.” – Oh Crap, it took us hours to load!

Fortunate for us the gov folk (them 2-guys) didn’t require the removal and inspection of our equipment.

However, they along with the stage crew, disappeared for awhile… 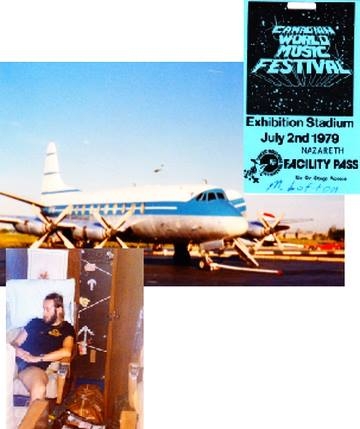