ed. working notes
Trello
(ed. note) Image of Heart Carboard Contract (During Durango move)
(ed. note) Dealing with flight crew members that wanted their wives to be stewardesses… Oh the pain I had to go through dealing with some of the sub-contracted pilots.

(ed. note) Image of the packing cardboard checklist I created after a recent move (to Durango) without scratch paper… Highlite some of the notations.

For 13 years (in their hay-days from the early 80s thru the 90s) I arranged and managed all of the private flight (air) transportation for the band, ‘Heart.

Many found memories of working with the girls and the band members, their management, attorneys, accountants, being at the band’s gigs and hanging with their wonderful road/tour manager (at that time), Dick Adams…

…btw, pretty much every one of the road/tour managers that I had aircraft flight arrangements with were unpretentious and great to work with!

(ed. tidbit note: differneces between a road and tour manager)

Since I continued to provide for some small aircraft inspections at my local airport as a trade for use of air time in such airplanes, I fortunately had a my disposal the use of many small air ships to shuddle around in from my existing Big Bear Lake, CA. docimile.

On one occassion, while working on one of the many Heart contracts for a tour, it was required that I get some paperwork signed by the attorneys for Heart. These agreements needed to be in the hands of the aircraft company I was sub-contracting with at the time in So California within 2 days.

Only problem was the fact that Heart’s attorneys office was in Seattle and FedEx wasn’t offering overnight delivery at that time.

So, I arranged for the use of one of my trade aircraft… a Grumman Tiger. A four place low wing that moved along pretty nicely for its size.

Within a few hours I was topping off the Tiger with gas and heading from Big Bear to Seatle WA. in order to handle this transaction.

What a handy treat it was in those days to have at my disposol many different small aircraft for flight use.

Flying the Grumman aircraft from So. Cal. to Seattle to fetch Heart’s contract took me about a half dozen hours. Lucky the weather was decent that day.

I spent the night in Seattle and blasted back down the coast to Burbank, CA. the very next day in time for the contract drop and deposit check at the subcontracted aircraft company location I arranged to handle this tour. 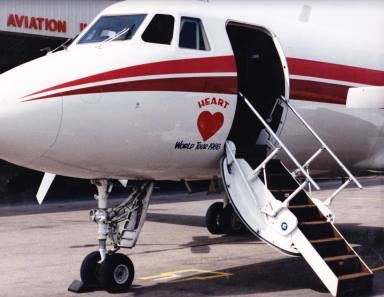